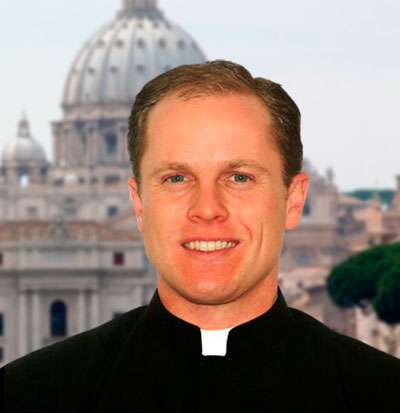 My mom’s best friend in high school was Alice Lozon, who became Alice Conlin.   And believe it or not- while Alice and my mom were driving down the road in an old Mustang Convertible, my mom met my future dad!  She told Alice, “If this guy’s last name is anything like yours, I will date him.” His name turned out to be Donald Conklin.  Six months after this providential encounter on the road, they were married in December of 1979.  About 13 months after that I was born.

My mom was born and raised Catholic.  My dad was raised Protestant, although he was not very devout at all when they met. Thankfully, they were married into the Catholic Church.  My dad came to love the Catholic faith little by little as the family grew (and my mom secretly prayed the rosary for him, sometimes with us kids).   After 12 years of being “unofficially” Catholic he was finallyconfirmed Catholic in 1991.

The first four of us Conklin kids grew up in Temperance, Michigan. We were good people, a normal family.  My dad was a teacher and my mom co-owned a child care center with her parents and later owned another small business.  We would frequent Mass on Sundays  at our small parish where my parents were catechists and youth ministers. Sports were an important part of my life: basketball, soccer, baseball and golf.  In my free times, when I wasn’t playing those sports, I was playing football, hunting, fishing, water skiing, swimming, and playing a little tennis… In short, my childhood was happy and fun. I think that my brothers and sisters would say the same. As I was beginning 7th grade my parents decided to start home schooling us. I guess that was the start of something more for our family in terms of faith and evangelization. That was also the year in which we met the Legion.

We had gone to a big, home school pig roast with a bunch of other families at a farm. There was a legionary there to celebrate mass for us before lunch. The Legionary was Fr. Lorenzo Gómez. We had never seen anyone celebrate a mass like that!  After mass he spoke with everyone and talked to me and my brother for a minute and then he went over to my mom and told her, “Your kids are special”. She appreciated the compliment from a priest she had never met. Then he asked her, “Can I take them on little trip with other boys to see our seminary in Connecticut?” She came over and asked us if we wanted to go to Connecticut on a trip, we would see the ocean, might stop in New York on the way… For me and my brother that sounded like an awesome vacation and we started to think that this home schooling thing was not so bad.

Fr. Gómez took us on the trip to Connecticut. I was very impressed by this priest. He was fun to be with, good at sports, funny… I fell in love with the Legion of Christ on that trip at 13 years old. We prayed, we played and we snuck all around the seminary. We had a blast! That trip changed my life. I didn’t see it perfectly clear at the time, but I had received a mission, I became a part of the mission of the Legion and the mission of the Church; to extend the Kingdom of Christ in the world!

My parents also took me to World Youth Day in Denver in 1993 when I was only 12.  That trip had a big impact on me too even though I didn’t really realize it at the time.  I was just happy to get my picture taken in John-Paul II’s chair with a Styrofoam miter on!

Between the ages of 13 and 16 I went on many trips with Fr. Gómez to the seminary, on door to door missions and on many weekend retreats. God was taking over my life and the more He took over, the happier I was. At age 15-16 I became a team leader of other younger kids near my home and was in touch with the Legionaries to organize retreats, missions and trips to help others have the same experience of Christ that I had. The closer I came to God, the more I delved into the most important questions about life: why are we here, what comes after this short life?

In 1997 our family made a huge leap from rural Michigan to Dallas, Texas.  It all happened in about a month so that my mom could start the K4J (Kids for Jesus) Virtue Program in the US and my dad could finally teach in a Catholic school (the Highlands) after having taught 20 years in public school.

For my life in Michigan I was the eldest of four children. Shortly after the “big” move another sister and two more brothers came along.  My youngest brother is 23 years younger than me and is doing his 1st communion at my first mass!

In Texas I studied at the Highlands School for two years, until I graduated from high school. All of my friends were applying for college and I was stalling.  I didn’t think God wanted me to go straight into college, I wasn’t ready.  I decided to join the Regnum Christi Mission Corps program for a year of volunteer work.  I asked for and was granted permission to do my year of volunteer service in Mexico City.  During that year I made up my mind that I had to see if God wanted me to be a priest before I could go on to study and work.

That summer I went to the vocational candidacy program in Cheshire.  My main reason for going and my main goal was to give God a chance to tell me that I did not have a vocation to the priesthood.  I gave my word to God that I would not leave until He told me that he did not want me to be a priest.

We started our eight day silent retreat before receiving the Legionary uniform and still He had not spoken. I was getting nervous, but I had given my word. The eighth day came and went and I received the uniform. We went out to present it to Mary in front of a statue in the seminary and I told Mary, “It’s your Son’s fault; He made me do this.” It was a pivotal moment of generosity when I had to forget all my worldly ideas and aspirations and just let myself fall into God’s hands even though there was not 100% certainty about my vocation.  I continued to think that God would tell me I didn’t have a vocation for most of my first year of novitiate.

At the end of my first year, after much prayer and discernment, for the first time I saw clearly that God had guided me to where I was for a reason, He was calling me!  For some reason He did want me to be His priest, and I said yes.  So at the end of my first year of novitiate I had given God my word again, this time it was not to wait for Him to speak, it was just a simple and total YES that I knew would mean all of my life.

Little by little I constantly grew in love and gratitude for the vocation that I had received. Four years after that definitive yes I made my perpetual profession. Seven years after that I was ordained a deacon. I have lived in Dublin (Ireland), Salamanca (Spain), Thornwood (New York), Rome (Italy) and Center Harbor (New Hampshire). I have seen the world and have experienced many cultures.  During these past 12 years of formation for the priesthood I have learned so much, done so much, and grown so much! God´s grace has been pouring down on me constantly! I feel so unworthy yet so grateful for such a beautiful calling.  I am about to be ordained a priest because it’s worth it!  It is worth it to do God’s will!

Fr. Ronald Conklin was born in Ypslanti, Michigan, the 30th of January of 1981. He lived most of his childhood in Temperance Michigan attending St. Anthony’s School through 6th grade and was later home schooled. After moving to Dallas, Texas in 1997 he graduated high school from The Highlands School in 1999 and then did a year of volunteer service in Mexico. In the summer of 2000 he entered the Legionary of Christ novitiate and was sent to Dublin (Ireland). He studied humanities and liberal arts for 2 years in Salamanca (Spain) and then worked there for three years as assistant to the instructor of novices. He did his bachelor’s degree in Philosophy at the Center of Higher Studies in Thornwood, New York. He studied Theology at the Pontifical Athenaeum Regina Apostolorum in Rome (Italy).